On Monday 14th July  a special visitor, Josh Lacey, came to Highlands to work with the children in Year 3.   Class 3Fo also took part in a video conference with children from Redbridge Primary, Fairlop Primary and Manford Primary.

Click HERE to go to the Josh Lacey website and find out more about this author and his books. 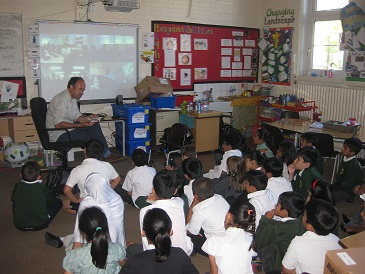 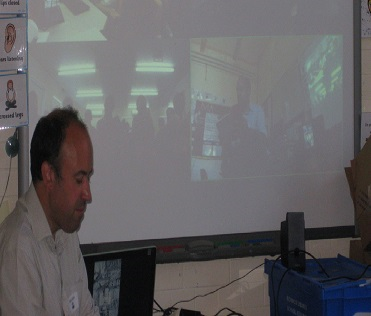 We were extremely privileged to have another video conference with Chris Lubbe, a former bodyguard to Nelson Mandela. Our Year 6 children joined other Redbridge schools for this multipoint vc.

Chris is an extremely motivational speaker who tells the story of his own experience of living under the apartheid rule in South Africa, where white and black people were segregated because of their colour. His own personal belief that apartheid was wrong led him to join the African National Congress (ANC) as a young man and he was subsequently arrested and sent to prison for taking part in a protest march. When Nelson Mandela was released from prison he asked Chris to be one of his body guards and Chris then spent many years travelling the world and protecting Nelson Mandela.

The children were able to ask Chris about his life and what it was like working with Nelson Mandela.

Chris is an inspirational speaker who delivered a fantastic insight into the difficult recent times in South Africa.  He certainly motivated our children to think about their rights and responsibilities.

Click HERE to find out more about Chris Lubbe

On Tuesday 10th June Highlands Primary School Council members were the hosts of the latest Redbridge school council video conference meeting.  These get-togethers allow the children to practise their skills in chairing meetings via a multipoint video conference.

Five other primary schools joined the video conference to discuss “travel to and from school.” The schools were Fairlop Primary, Fullwood Primary, Redbridge Primary, Manford Primary and Mayespark Primary and each school gave a short presentation about this topic. School Council members from primary schools across the London Borough of Redbridge have been meeting termly via video conference to discuss common issues in their schools.

We were delighted that Roger Evans, Councillor for the London Borough of Redbridge, and newly appointed Chairman of the London Assembly was able to join the children at Highlands for this video conference.  Mr Evans spoke to the children about his new job, listened and commented on the presentations and then took questions from each school about transport issues.

The video conference session was a great success and our thanks to Mr Evans for making it so enjoyable.

The children in Year 5 have been studying the Solar System.  They took part in a video conference with the National Space Centre, who offer a variety of video conferences to support this topic.

This was a fantastic interactive session where the children learnt about stars, black holes, planets, galaxies and communication; through to living in space and how to wash your hair and go to the toilet!  Everyone really enjoyed the session, with a few budding astronauts now in our classes.  This was a really good VC and well worth booking.

The Eco Warriors from Fairlop Primary school hosted a video conference with children from Redbridge Primary and Highlands Primary on Wednesday 7th May.

The Eco Warriors at Fairlop  are currently working towards the Green Flag Award (Eco Schools) and as part of that, they are required to share some of their ideas, activities etc. with other schools.  It was a great idea to do this by video conference.

The Eco Warriors spoke about:-

-Eco Week (The focus of this was  - Looking after the environment)

-Discussion with visitors from Norway.

At the end of the presentation the children from Redbridge Primary and Highlands Primary were able to ask the Fairlop Eco Warriors questions about their work.