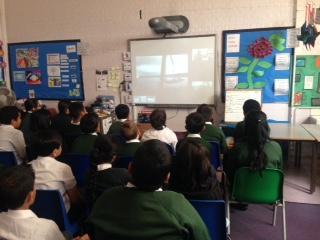 Monday morning is always the best time for learning. Everyone is alert and ready to go!

In 5Pa, that Monday morning learning feeling was multiplied ten fold by the anticipation of a video conference with explorer James MacDiarmid.

James linked with us directly from Australia and instantly had the children eager to learn more. He shared his experiences of travelling to Antarctica, which tied in wonderfully with our Spring topic.

Detailed images of Penguins, King Penguins, Sea Lions and Seals were thrown up on the screen and James described his encounters with each animal and how they responded to humans.

5Pa were glued to his every word and James was able to give descriptions that the children could easily visualise.

James left the children with tips to become explorers in their own way. I for one had children telling me how they are going to explore their local parks and do things that they hadn't previously done.

This VC was a great success!

4Ow were given the opportunity to take part in a unique video conference delivered by a Wizard.

The wizard's name was Andrew Newbound and his magic power was bringing the English language to life. The children were definitely spellbound.

In partnership with Manford Primary, 4Ow learnt about the intricacies of the English language. The children worked together to find rare words in the language that contained no vowels and others that contained many.

The children showed a great understanding of the language and found out about the history of everyday words. Who knew the word ' restaurant' was made by the French?

4Ow would like to thank Andrew Newbound for sharing his knowledge and passion for the language.